Environmental Science Merit Badge – An environmental scientist need to know a great deal about living things, their ways of life the environment its effect on life.

For instance, an environmental scientist might study how the chemistry of soil affects ant behavior.

Some other things that an environmental scientist might study include plants in a forest, the makeup of rainwater, the purity of air, and how many living things are found in a given environment. 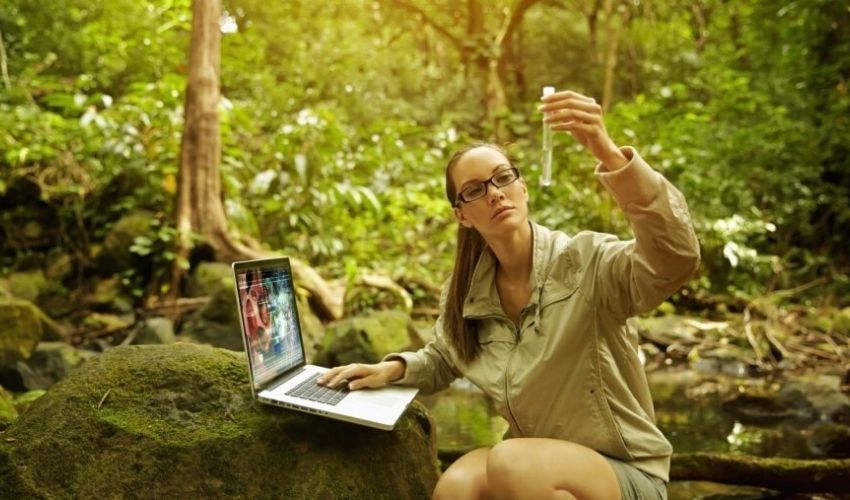 Imagine that you are watching a line of ants carrying pieces of food from a picnic site to an anthill. If you push the ants aside, they soon line up again.

You want to know how the ants know where to line up. To try to answer that question, you follow a series of steps known as the scientific method.

Not all hypotheses can be tested by doing an experiment in a laboratory. Some hypotheses are tested by observing events and collecting facts.

You could test which kinds of birdseed a particular type of bird prefers just by observing what birds eat at several feeders.

This information for answer the requirement 1.

Timeline of the History of Environmental Science

1. From conservation to Environmentalism

During the late 1800s and early 1900s, people began to speak out about human activities that were causing serious environmental problems such as air and water pollution.

In 1907, a scientific study by M. C. Marsh showed how fish were hurt by industrial wastes released into water sources.

In 1962, Rachel Carson published Silent Spring, a book that discussed the dangers to the environment from using the pesticide DDT.

Carson and other people who wrote about the environmental effects of human activities helped make the public aware of environmental concerns.

This public awareness led to the designation of April 22 as Earth Day. The first Earth Day in 1970 sparked an environmental movement in the United States.

2. Boy Scouts and the Environment

In the early 1900s, as the conservation movement grew, two separate organizations for boys that focused on nature and the environment were founded.

In 1902, the Woodcraft Indians was started in Connecticut by the naturalist Ernest Thompson
Seton to preserve the wilderness knowledge of American Indians.

As one of the foremost naturalists of his time, Seton spoke before the U.S. Congress in 1904 in support of the legislation, which had been authored by William T. Hornaday, to protect migratory birds.

About the same time, Daniel Carter Beard, a former surveyor and engineer who became an author and illustrator, wrote a book titled The American Boy’s Handy Book.

In 1905, Beard founded a club called Sons of Daniel Boone to teach boys about nature, conservation, and outdoorsmanship.

From its beginnings, the Boy Scouts of America had a strong foundation of woodcraft, nature study, and conservation. Many activities in Scouting come from the activities of American Indians.

Many of the principles that Scouts uphold come from the conservation ethics of Seton and Beard. The BSA has taught more than 45 million young environmentalists throughout its history.

Currently, with more than 1.5 million active members, the BSA continues to train American youth in principles of conservation and environmental science.

The following information is in answering the third requirement of the Environment Science Merit Badge.

Although laws and agencies have been established to help protect and preserve nature, much more needs to be done. Before you can help protect nature, you must understand how it works.

Imagine that you are standing on the bank of a quiet river in Florida. Along the banks of this river you see a great blue heron, an alligator, a rat snake, and a raccoon. On a rock in the river, a Florida red-bellied turtle basks in the sun.

Looking down into the water, you see the long body of a fish called a gar gliding through slender leaves of eelgrass. Snails feed as they travel among the water plants. Here and there, whirligig beetles dot the water surface.

Tiny duckweed plants float near the quiet banks. A bullfrog jumps from the river’s edge and disappears into the water.

All of the living things in and around the river are connected in some way. Bullfrogs eat whirligig beetles. Herons eat bullfrogs, rat snakes, gars, and hatchling red-bellied turtles.

1. Living things in the Environment

Snails, red-bellied turtles, and eelgrass are living things. All living things have the ability to reproduce, that is, to make more of the same kind of living thing. Living things also change during their lifetimes.

They grow and develop and have a life span that eventually ends in death. Another important characteristic of living things is that they can usually adjust to their surroundings. They can respond to changes in their environments.

Scientists call living things organisms. Think of all the millions of organisms that inhabit Earth. Organisms can be found in the deepest oceans and on the highest mountains. Some bacteria can even be found high in the Earth’s atmosphere.

The part of Earth that contains and supports living things is known as the biosphere. The biosphere is all parts of Earth where life exists on land, in water, or in the air.

Within the biosphere are many different kinds of environments. Beaches, forests, glaciers, deserts, and rivers are environments.

Every environment on Earth includes both the living things found there and the physical, or nonliving, environment.

in which living things exist. Think about the living things in your own environment. No matter where you live, organisms surround you.

The bacteria on your skin, your pet, the fleas on your pet, the spider in a corner, and the plants growing outside are organisms in your environment.

You have interactions with the bacteria, your pet, its fleas, the spider, and the plants, but these interactions are not the only ones in your environment. There also are nonliving things that influence the organisms in every environment.

Let’s go back to that Florida river you imagined before and think of nonliving things. You probably know that the water in the river is nonliving, but what about the wind? The sunlight? Rocks in the river? The soil that supports the plants growing at the river’s edge?

These are all nonliving things that interact with the living organisms in the river environment.

In your environment, the weather affects you and your pets. The soap you use when you shower affects the bacteria on your skin. Sunlight, temperature, rainfall, and minerals in the soil affect the plants outside.

Let’s look at four nonliving factors to find out how they affect the living things in an environment.

Life on Earth would be impossible without water. The bodies of most organisms are 50 to 95 percent water. Water is necessary for many life processes, including respiration, photosynthesis, and digestion.

Water covers more than 70 percent of Earth’s surface. But about 97 percent of the water on Earth is salt water contained in oceans. That means only about 3 percent is freshwater.

Most of the freshwater is not available to living things, because it is frozen in the ice caps or glaciers.

In fact, only a tiny fraction of Earth’s water is fresh water that is available to organisms. This freshwater is in rivers, ponds, lakes, streams,
underground water supplies (aquifers), or in water vapor.

Soil is formed by the physical and chemical breakdown of rocks and by the actions of living things. The breakdown of rock into soil releases minerals that organisms need for their life processes.

These minerals return to the soil when organisms die and decay. Decayed material that once was living is called organic matter. The more organic matter in soil, the more fertile it is.

Soil determines the type of plant life that can grow in certain environments. Therefore, soil has an effect upon the other organisms that can live there, too.

Among the factors that determine which organisms can live in a particular soil, the environment is the mineral and organic matter content, air content, and soil texture.

Nearly all living things depend upon the sun for energy, either directly or indirectly. Plants, algae, and some other organisms “trap” sunlight and capture its energy in the
process of photosynthesis.

Plants use this energy to power their life processes, or they store it. When a snail eats a plant, for example, the snail uses the stored energy in the plant to carry out life processes such as breathing and moving.

When a raccoon eats the snail, the energy is passed along. Green plants, algae, and other photosynthetic organisms must live where there is sunlight.

In aquatic environments, photosynthetic organisms can live only in the top layer of the water, where sunlight can reach the organisms.

In general, the temperature of an environment depends on the amount of sunlight it gets. Air is heated more at the equator than at the poles.

This is why tropical areas near the equator are hot, the polar regions are cold, and the regions in between have moderate temperatures.

Temperatures also are affected by Earth’s rotation, by winds and ocean currents created by that rotation, by the tilt of Earth on its axis (see the illustration), and by elevation.

As you hike up a mountain, the air temperature drops. That is why it is possible to have a snowball fight on top of Mount Baldy at Philmont Scout Ranch in New Mexico in July!

Think again of the organisms living in a Florida river. There are several different species of turtles living there. A species is a group of organisms that has characteristics in common and can breed to produce offspring.

You can see that the river environment contains many different populations of organisms.

Populations of organisms, of course, do not live alone in the environment. Most interact with other populations in a given area. The red-bellied turtles interact with the eelgrass
(by eating it).

The eelgrass provides hiding places for young fish and tadpoles. The great blue herons eat the bullfrogs. Populations are constantly changing in size, density, and age as they respond to changes in their environment.

If the herons eat all of the adult bullfrogs in the river, for example, the population of bullfrogs will include only tadpoles and eggs.

It might be enough until here our information about the environmental science merit badge. To complete the other requirements, you can read the information in the pamphlet that I have shared.