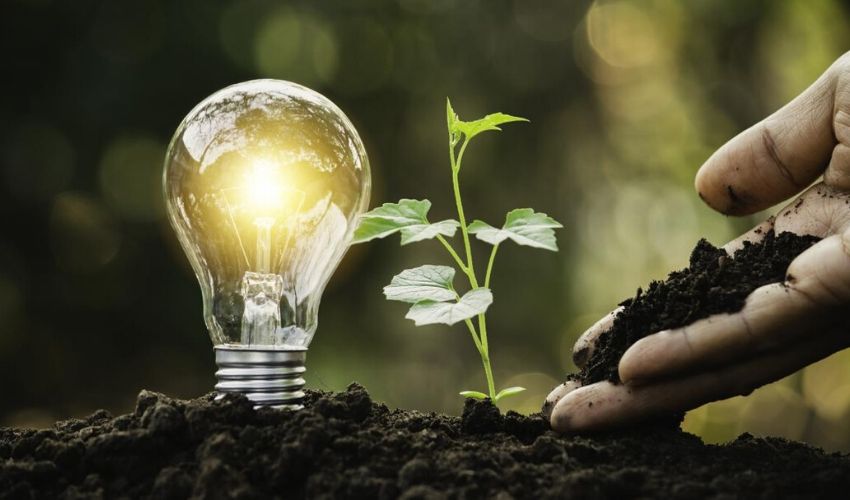 The Story of Energy 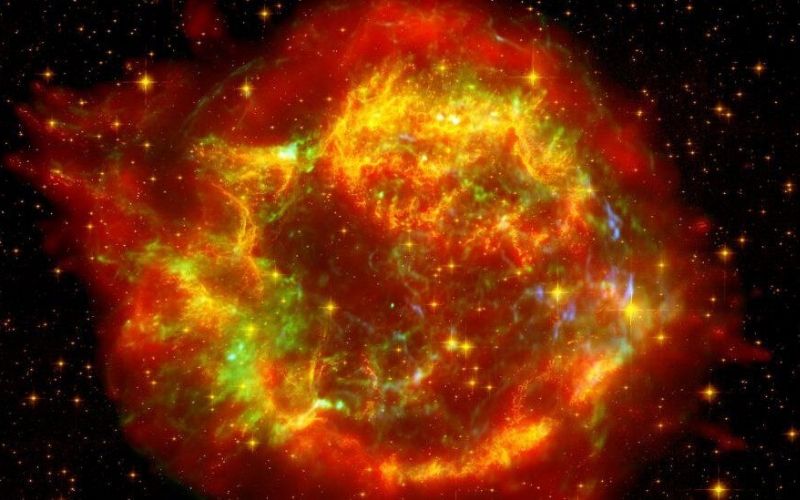 All forms of energy trace their origin to the stars. Stars are huge balls of mostly hydrogen held together in space by crushing gravity.

Stars radiate vast amounts of energy in all directions by changing hydrogen into helium and other heavier elements.

Through this process, stars either release energy or store it in the nuclei of the heavier elements they create. In the tremendous heat and pressure of a star, two hydrogen atoms are crushed together until they join nuclei in a process called fusion.

The new nucleus formed through the fusion of hydrogen is of different element helium. The mass of the helium nucleus is less than the mass of the two hydrogen nuclei that formed it.

The tiny amount of lost mass is converted into energy that spreads out from the star into space. This radiant energy is the main character of our story as it moves energy from the stars to Earth. As stars get older, they fuse atoms into heavier elements.

Heavy atoms form in a spectacular way. Very large stars eventually explode in an event called a supernova. This explosion creates very heavy atoms and spreads them into space.

Scientists believe that all atoms heavier than iron were produced by supernova explosions. Some nuclei have energy stored in them after their formation. Over time they release this energy through radioactive decay.

By radioactive decay, an atom may release pure energy and become more stable, or discharge particles that carry off the energy.

All of the energy sources in the world around us come from the energy pouring out of stars. And most of the energy that powers the functions of our world comes from a tiny portion
of the energy of the sun our nearest star.

The sun constantly produces about 400 billion megawatts of energy. The amount that hits Earth is tiny (about five 10-billionths of the total energy of the sun), but that tiny portion powers all of Earth’s life forms, food production, and weather processes. The rest of the sun’s energy goes flying past us into space.

We can understand the whole mix by understanding the different types of beverages that make it up. While this concoction is made of seven different drinks, they all are alike in one way each is made of mostly water.

Similarly, EMR is a mix of seven different kinds of what is basically one thing radiant energy. Scientists divide the mixture into different categories for ease of study and discussion. The seven kinds, from lowest to highest energy, are as follows.

Energy comes to Earth from electromagnetic radiation given off by the sun, stars, nebulae, and other sources in our galaxy. Energy is stored in heavy atoms made in the death explosions of stars.

So how does this celestial energy drive the natural processes in our earthly world?

Mechanical energy is the motion energy of physical objects. Solar radiant energy can move objects, including air molecules in Earth’s atmosphere. As air molecules absorb heat from the sun, they gain energy and move faster.

As they move faster, they spread out. As they spread out, the air in a given space gets thinner, making it lighter, and it rises. The rising of heated air causes winds that have many powerful effects on Earth.

For example, if the wind becomes strong enough, it picks up sand and dust and becomes a powerful eroding force. Wind blowing over water creates waves and currents.

Wind pushes sailing ships, and it can help you ride your bike (or hold you back).

Another form of mechanical energy is the effect of the wind on movable solid objects. As wind vibrates leaves, a dining fly, or the siding on a house, it produces sound.

Any time the use of energy causes air vibrations, the result is sound waves. Sound carries the energy of molecules in motion.

Radiant energy has other effects on the natural environment. Heat, microwaves, and visible light all make water molecules move faster.

Solar energy increases the temperature at the surface of the oceans and adds energy to snow and ice until they are warmed enough to melt into water.

But probably the most important effect of the sun’s radiant energy on the water is to evaporate liquid water into water vapor, which rises into the atmosphere and is moved about by the winds.

When it cools, it condenses back into liquid water and falls as rain.

The sun’s radiant energy drives processes by which atoms form bonds that store energy. The best-known way this is done is photosynthesis.

A plant absorbs low-energy substances from its environment (mainly carbon dioxide and water) and, using radiant energy from the sun, builds complex molecules (glucose being the most important).

An animal may eat and digest the plant and use the energy released from the plant’s molecules to make molecules for its own use.

Also, burning the plant will release the chemical energy stored in the molecules. Burning gives radiant energy light and heat. This process of storing radiant energy in high-energy molecules has been happening on Earth for a long time.

Under the pressure of the rocks and the heat from the interior of Earth, these materials became coal, oil, and natural gas. These forms of stored chemical energy are known as fossil fuels.

The heat from inside Earth that helped form the fossil fuels is radioactive decay one of the few forms of energy that does not come directly from our sun. Radioactive atoms, formed in stars, release energy from their nuclei.

Inside Earth, a constant release of this energy continues to heat the interior. If not for this process, Earth would long ago have cooled to a frozen mass, even with the energy input of the sun.

Today, the fission process is used in nuclear reactors in power plants that produce electrical energy.

Another source of electricity in nature comes from certain electrochemical reactions. The most interesting of these may be the reactions in the bodies of electric eels that use bursts of electricity to stun prey and for defense.

The field of the magnet causes an electric current in the conductor. Such a device is called a generator and is used in cars, power plants, and other places.

By using sources of mechanical energy, magnets can be spun inside coils of wire, producing huge amounts of electrical energy.

Every useful process happens through the conversion of energy from one form to another. Before people invented cars, tractors, and power plants, they had only the muscle power of humans and animals.

Living animals (including humans) are complex systems for converting the chemical energy stored in food to heat and movement. Some of that chemical energy is used to make the heat that keeps our bodies warm.

When we use our muscles to breathe, pump blood, run, or pitch a tent, the muscles must have energy that comes from the food we ate. Other than muscle power, fire has been the most useful energy conversion.

Fire is an energy conversion from chemical energy to light and heat. Furnaces and heaters function to make heat available to keep us comfortable in cold weather. Many devices have been invented to make use of heat to help us accomplish other tasks.

An engine is any device designed to convert thermal (heat) energy into useful motion (mechanical energy). People have invented many different systems to accomplish this vital energy conversion.

Early steam engines used fire to power trains, ships, and farm machinery. Today cars, trucks, buses, trains, airplanes, and tractors get their power from internal combustion engines, which use fire inside a chamber in the engine.

A rocket engine uses the rapid burning of its fuel to provide the powerful pushing force to send vehicles into space.

Electric motors are machines that convert electrical energy into mechanical energy. Many devices rely on electric motors creating movement when we need it. Fans move air and push air out of furnaces and air conditioners to heat and cool us.

Energy conversions are used to make electricity. Many power plants rely on a combustion boiler to use a chemical fuel to boil water into steam. Nuclear plants use a nuclear reactor as their source of heat and steam.

Steam-powered power plants need to convert the motion of the steam from a straight line into a circular, spinning motion. The device that does this is a turbine.

The spinning motion of the turbine shaft can then be connected to a generator, which converts this mechanical energy to electricity.

We often convert electrical energy into light. The most common electric light is an incandescent light, which superheats a wire inside a bulb until it glows.

Fluorescent lights are different and actually make two energy conversions. First, electrons passing through a mercury gas strike mercury atomns and give off ultraviolet light. The UV light strikes a coating on the inside of the tube and changes UV light into white light.

This effect is known as fluorescence. We also are able to convert electricity into a useful form of light with lasers.

When all of the chemicals have reacted, the battery cannot be made to produce more electricity.

A car battery is a storage battery that uses an acid solution and lead plates to store the electricity used to charge it.

By applying electricity to the battery, the lithium atoms can be forced back to the anode. Then the battery is ready to use again.

So many other devices convert energy, it is impossible to name them all here. This list, however, may give you additional ideas for completing requirement 2.

The Forms of Energy table lists devices that convert energy from one form to another. The columns represent the energy that is used, the rows show the energy that results.

Shaded boxes mean there is no practical device that makes the conversion described. For example, no way is known to use chemical energy to make atomic (nuclear) energy.

The first law of thermodynamics is good news for energy users because it tells how energy can be changed from one form to another to make it usable.

Many different devices use energy conversions to provide the systems that make modern
living possible.