Bugling Merit Badge – What would summer camp be without the bugle sounding “Reveille” in the morning and “Taps” in the evening? Camp and the bugle go together. The basic technique is the same as that used to play other brass instruments, but the bugle is a simpler instrument.

By varying the embouchure and the airspeed through the instrument, a bugle player produces a set of notes called harmonics. All bugle calls are composed of these harmonics.

The bugle is an ideal instrument for the beginning musician because most the music uses only four notes. The ability to read music is not necessary, because the tunes are familiar and you can play by ear. Also, the bugle is inexpensive.

In effect, the trumpet player plays a great many bugles with the ability to quickly change from one to another.

The bugle is an ancient instrument used in many civilizations. Many early bugles were made from sheep and goat horns and elephant tusks.

The Romans used the bugle for pageantry and military purposes. They were the first to develop techniques for tube bending, which allowed them to make more compact instruments.

A pair of long, straight bugles was found in the tomb of King Tutankhamun, which indicates these instruments were used in Egypt more than 3,000 years ago.

The warm-up is the most important part of a practice session. The two main parts of a warm-up are long tones and lip flexibility. Long tones get the air flowing and the lips buzzing. To start, take a full breath and play a mid-range note.

Hold it with a steady tone and constant airflow. When you run out of air, inhale fully and replay the same note. Stay relaxed-do, not strain. After a few long tones, go on to lip flexibilities. Flexibilities are lip slurs.

They help the lips become more limber and help develop the range. Slowly slur from your first note (C in the third space of the staff) down to the next harmonic (G on the second line) and back again. As you slur to a higher note, use faster air.

Hold the last note until your breath is gone. Then inhale fully and repeat the exercise, following the scale downward.

If you are warming up on a trumpet, repeat the slur exercises using different valve combinations in order (that is, first with valves, then with the second valve down, and so on).

As you learn to play the bugle, it helps if you understand how the various sounds are made. The natural (or fundamental) note of the instrument is determined by the length of the tube and whether the tubing is the same diameter all the way through or increases continuously, like a cone.

You do not have to blow a lot of air through a bugle because the sound is made by getting your lips to vibrate much like a rapidly opening and closing valve.

Your blowing technique varies the vibrations in the tube and produces different notes. This has the same effect as changing the length of the tube.

For example, if you play a note and then adjust your lips to play the same note an octave (eight whole tones) higher, the higher note is the same as playing the bugle that has had its length cut in half.

Stand straight as you play. Position the mouthpiece to your lips with one-third on the upper lip and two-thirds on the lower lip. Press your lips together tightly and blow into the mouthpiece. (Without the bugle, this should make a buzzing sound.)

To make a higher note, accelerate the airflow, using the lip muscles to close the lip aperture (opening) while at the same time contracting the diaphragm (the muscle between your chest and stomach).

Also, raise the tongue inside the mouth (think ‘eeee” instead of “oooo”). This increases the airspeed and makes higher notes easier to play. (Do not pull the instrument tighter to your face as you play high notes.)

To play lower notes, loosen your lips. Drop the jaw and lower the tongue. This slows the air and makes lower notes resonate more. You create a fuller, warmer sound when your throat is wide open and relaxed-as if you are fogging a mirror.

If you blow hard and fast with tense muscles, as if you are trying to blow out a candle, you produce a thin, edgy sound.

Anyone who teaches trumpet, cornet, or trombone can help you learn to play the bugle. Perhaps you can arrange a few sessions to get started.

Be sure to hold the bugle horizontally. A downward angle will interfere with your breathing. Also, take deep breaths so you will have plenty of air.

Care of the Bugle

The musical quality of the bugle comes from its basic shape. Any dents or buildup of dirt in the tube will reduce the tone quality and ease of playing. One easy cleaning method is to pour cold water inside to wash out dust and saliva.

Be sure the bugle is dry before storing it. It is also a good idea to store the bugle in a bag when it is not in use, to keep out dust.

A note sign with a number placed at the beginning of written music indicates a specific tempo: the number of beats per minute. For example, ♩ = 72 tells the bugler to play at a speed of 72 quarter-note beats per minute.

A dotted quarter note ♩ lasts a beat and a half. To fulfill requirement 4, you do not need to be so precise. Just play the calls at quick, moderate, or slow tempos, as indicated on the music.

“First Call” is used for getting attention. It is commonly heard at horse races.

“Assembly” signals everyone to gather at a designated place. Some refer to this as “Fall In.”

“Drill” is a call first heard in military days. It is best avoided unless your troop has agreed on what it signals. For example, it could be used for camp cleanup or to report for some camp activity.

“Fatigue” summons those who are to report for some type of work activity. Because it is rarely heard, its message might not be recognized unless your troop knows it well.

“Officers would be played for a meeting of the troop leaders. It is unfamiliar to most troops and you probably will not use it.

“Recall” signals an end to something that is underway. For example, in a game of Capture the Flag when everyone is scattered far and wide. “Assembly” also could be used.

“Church” announces that services are about to begin.

“Fire” is an alarm that signals danger. This call is unique and will get almost anyone’s attention.

“Retreat” signals the end of the official day. It Usually is played just before “To the Colors” or the national anthem, which is played during the lowering of the flag.

“To the Colors” is played while the flag is raised and lowered.

“Call to Quarters” signals everyone to get ready for bed. “Taps” follow this call, at which time lights are turned off for sleeping.

“Taps” signal the end of the day, when everyone is to go to sleep. It is also played at funerals.

Composing Your Own Bugle Call

To help you fulfill requirement 4 to compose an original bugle call, here are some tips from Jeff Weir, director of the U.S. Naval Academy Drum and Bugle Corps.

Because bugle calls were meant to sound orders over great distances, they should be played at a solid forte (loud) volume, with good breath support.

Take in enough air to play an entire phrase in one breath. The tempo, phrasing, and articulation of the bugle call should reflect the order you are trying to give. For example, “Reveille” wakes people up, so it is fast, lively, and played staccato.

“Taps, on the other hand, are slow, soothing, and played legato. Be precise with your articulation and phrasing because muddy playing could confuse the order you are trying to convey.

whenever you play a bugle call for your troop, make it sound exactly the same every time you play it. The recognizability of the bugle calls is what makes them effective ways to give orders.

lf your bugle calls were played differently every time, how would your troop or patrol know whether you wanted them to charge or go to sleep? Try to make your new bugle call balanced with two phrases of equal length.

Here is a hint to compose your own original bugle call: To make your bugle call sound more musical, have your first phrase end on G and your second phrase end on C. In music, those two points are called cadences.

When sounding an order on a bugle, the entire bugle call is usually repeated to make sure the troop has heard and understood the order. 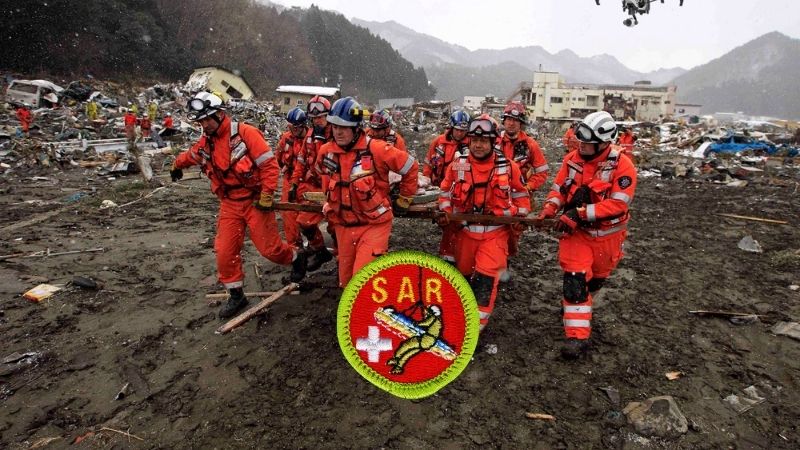